Did you see the Wimbledon mens final on Sunday? Raffa Nadal won in straight sets – 6-3, 7-5, 6-4. Imagine not seeing the game and just having the result, how insightful could you be about how he won?

[geoads2]
For many sales managers, that is exactly the position they are in. They have the sales results or Key Performance Indicators (KPIs), but don’t have any meaningful or accurate Critical Success Factor (CSF) data. Consequently their capacity to interpret the results is very limited.
Have a look at Nadal’s data sheet below: 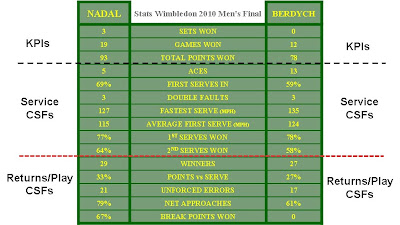 Once you know he won the match, notice how uninteresting the KPI data becomes and how your interest is drawn to the CSF data. The next striking thing is how close the Service battle was, on many of the factors Nadal did worse than Berdych. Several of these CSFs don’t seem that critical when they are delivered to a minimum quality level.
Have a look at the last CSF, if you want to understand in an instant how Berdych lost, there it is. He didn’t win a single break point whilst Nadal won 67% of his opportunities.
Apart from that huge differential another, almost contradictory theme is how Nadal won through being consistently better around other variables. The number of winners hit – 2 more, first serves in – 10% better, first serves won – 1% better, second serves won – 6% better, unforced errors – 4 fewer, but it’s the compound effect of these small differentials that creates this winning performance.
Finally look at his aggression. Nadal came to the net almost 20% more frequently than Berdych, putting additional pressure on his opponent, taking the game to him, being more pro-active.
Imagine having an accurate data set like this, correlating all the CSFs of your sales process to the KPIs achieved, split by individual. It would give you a laser like focus on where both the quality and quantity of activity needs to improve. It would also show you where potential best practice exists for you to model and disseminate across the whole team.

How To Improve Your Future Thinking