More sales are lost at the closing stages than any other often because the salesperson does not know what to say.
[geoads2]
Even when the techniques are known to them, they will frequently still hesitate – just through the fear of being turned down.

Here are some tips on when and how to close a sale:

Your relationship will not suffer by asking them to buy – because they know you are there to sell and they expect you to ask.

You need to be tough – minded about closing. This does not mean being overbearing or hard-boiled or using high pressure tactics.

The basic rule is:
[geoads3]
To Close a Sale – Ask a Closing Question

Close the Sale with Confidence in Your Product, Your Company and Yourself.

To help you equip yourself with the skills to become a value add sales person, why not attend our Selling… The Essentials for Success course.

To be effective in any sales organisation, a leader has to have the ability to influence using the four power bases appropriately. Generally the more effective the leader the more he/she will utilise personal power supported where necessary by expert power.

In an organisation we have to allow for the influence the leader will have on the ‘situational variables’. These variables are internal and external to the organisation:

A leader needs to anticipate the impact of his/her behaviour and the situational variables on the relationship he/she has with his/her subordinates and the effect this resulting relationship will have on individual motivation, group cohesion, and the achievement of results. Should external stakeholders and/or the organisation be dissatisfied then the internal and external situational variables may be modified:

What do the following reasons for quarterly targets being missed have in common?

Apart from appearing on a real list collected from a client’s CRM system, the common denominator is they show a complete lack of ownership on the part of the salesperson. No one reason has anything to do with their performance, activity or behaviour, they are all (apparently) external to their influence or actions. The truth behind these reasons is what is interesting. How responsible is the salesperson for allowing these situations to develop? What earlier actions could they have taken to prevent the order not being placed?

If salespeople don’t see themselves responsible for the circumstances they encounter they bother much less in trying to influence outcomes, their energies focused much more on getting their excuses prepared. A business version of ‘my dog ate my homework’. High ownership cultures have sales people stating things in terms of what they can ideally control or at least influence.

Look at the same list of reasons with a high ownership perspective; you’ll notice the word I appearing much more:

A very different mind-set, one where admitting faults and mistakes and finding solutions are all possible. Salespeople who take ownership of their environment, control the outcomes much more effectively.

We’ve been out and about working with clients over the last year, and 2007 looks set to be just as busy. As businesses are increasingly working across national and even continental boundaries, we’re noticing that employees are far more relaxed about working with colleagues from very different backgrounds.

Diversity is becoming for many people a real bonus at work, giving them new openings and insights, with opportunities to learn being presented in new ways. 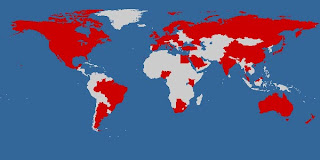 This map shows the countries we’ve been working in on consultancy projects, as well as facilitating workshops, and where participants have been using our enabling tools such as e-learning and 360 feedback.

If we’ve missed you out, do let us know!

Odds are you’re a teeny bit bored of ‘news’ stories about when Tony Blair will leave office, and whether Gordon Brown will take over smoothly, and if he does whether the electorate will vote for him.

The story has been going on a long time. It’s caused disruption and negative debate within the Labour Party and has brought decision making in the government close to a standstill. People thought they wanted a clear and straightforward transition of power over a period of time, but perhaps those people are now more careful about what they wish for.

Planning succession is important in the world of business, and organisations can learn from the difficulties that the Labour party now find themselves in. A successor was indeed identified, but in any other organisation the odds are after ten years he’ll have gone elsewhere to find a new role, though countries rarely appoint head hunters to find new heads of state!

Everyone assumed Gordon Brown was a shoo-in for Leader of the Labour Party, so no-one else has credibly risen to a point where they make themselves a natural candidate for the role. With no positive competition for the job, it’s unlikely that the person who gets it will be appreciated as the best candidate and supported as such.

Planning succession is important to the long term success of organisations, but over planning that succession, without taking account of changing circumstances and changing people, may be just as damaging as not planning at all.

To talk about how your organisation can take a positive approach to succession planning, one that provides continuity without stifling debate and innovation, Contact Us. 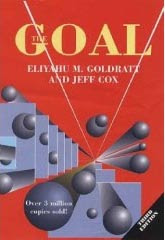 The Goal is a classic management text book, although it doesn’t really read that way. Written instead as a novel, almost a detective story, it takes you through management problems from the perspective of the people involved.

Rather than focussing on the theory behind decisions, problems and opportunities, The Goal looks at the practical realities.

Drawing lessons from encounters with old friends, family and how to cope with a cub scout who likes to be prepared, The Goal is more like The Da Vinci Code than The Wealth Of Nations. That doesn’t mean it doesn’t contain insights, and have parallels that can help you to understand some of your key business issues, whether you’re in manufacturing or not.

The Goal is quick and easy to read, and gives the reader easily digestible ideas, as well as new perspectives on how they can learn about business.

Then you may be in a situation where you need to be doing coaching of your own.

In a world that is changing so rapidly there is a choice. The approach taken can be the ostrich position, which generates its own dangers, but has the added advantages of ignorance about the risks. Alternately, each of us greets change and builds development, growth and achievement into our everyday environment.

The role of coaching is to support individuals, teams and organisations to be pro-active. This comes from generating direction through clarity of goals. Large organisations with extremely clear objectives that are understood throughout the organisation are far more likely to achieve them.

To help become a successful coach, why not attend our Developing Your Coaching Skills.

At all levels of people’s working lives it is an inevitable part of their professional career to give speeches or presentations. In the early part of your career you could be asked to give an informal briefing to colleagues on a recent training course or a demonstration on how a piece of equipment works. As you become more established you may find yourself going through the results of a campaign to a group of managers; giving colleagues a progress update on a project; putting forward your proposals to a client; or even delivering a sales pitch. Below is a self assessment of your approach to using and developing visual aids (literature, samples, slide, presentation etc.) Answer the questions true or false:

2. I avoid using visual aids as they turn customers cold.

3. Most presentation material is used to aid understanding.

5. My presentation material consists of only company generated material.

Structured Training offer a highly interactive programme called Improving Your Presentation Skills that will give you the confidence and help you to develop the skills to deliver professional presentations that get you the results you want.